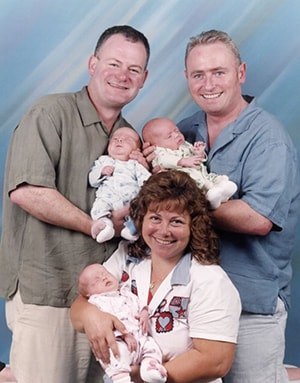 For John McMahon and Gerard Whelan, Doctors Medical Center holds a special place in their hearts.

Nearly 17 years ago, the Irish couple became proud parents to triplets, thanks to the help of a surrogate mother from California. The couple met her through Growing Generations, an agency dedicated to helping couples have children.

The triplets – Connie, Tom and Max – were born at Doctors Medical Center on June 12, 2001. The babies were admitted to the Level III Neonatal Intensive Care Unit (NICU), which is common among births of triplets, where they were cared for by Bernie Durossette, RN.

Bernie, who has been a nurse for 40 years and still works at Doctors Medical Center, got to know the family very well during their stay at the hospital. Once the babies were cleared to travel home to Ireland, the parents hit a roadblock. According to airline regulations, each baby needed to be accompanied by an adult in order to travel. Bernie offered to be the third adult for the triplets and fly to Ireland with the parents. She stayed for ten days to help them get settled, even assembled strollers and other baby essentials.

Fast forward to 2018. The triplets are now approaching their 17th birthday and the family still remains close with Bernie. They recently traveled to Doctors Medical Center to visit her, along with other nurses who helped care for the triplets while they were in the NICU.

“We received such great care and met such lovely people in the NICU at DMC in 2001 that we really wanted to stop in and say hello to them all. It was really lovely to see everyone again,” McMahon expressed. “The visit brought back so many happy memories for us and Connie, Tom and Max got a real kick out of seeing where they started their journey.”

“No matter how much times passes, when we see each other, we pick up right where we left off,” Bernie explained. “They have become like family to me, and to watch the kids grow up has been amazing.”

Bernie has visited the family in Ireland several times since they left California in 2001, but this was the first time the family had been back. After soaking up countless hugs and laughs, the family said they will definitely visit again.

Doctors Medical Center is so proud to be a part of this incredible bond that continues to grow year after year, and from across the globe.

When we asked Bernie to sum up her relationship with this family, she referenced a special quote from Barbara Bush: “Never lose sight of the fact that the most important yardstick of your success will be how you treat other people – your family, friends and co-workers and even strangers you meet along the way.”