Skip to main content and our Accessibility Statement may be found in the footer of our website.
COVID and Visitor Info
Back To Home
{{CTAButtonText}} 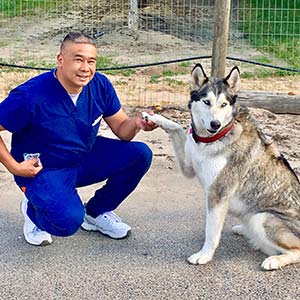 Modesto, Calif. – Employees at Doctors Medical Center go above and beyond for their patients on a daily basis, and that includes the incredible staff in the hospital’s Emergency Department.

Neil Pangilinan, RN – who is also a local law enforcement officer – was working triage in the E.D. when it was brought to his attention that a dog had been left in a vehicle at the hospital. The temperature was 85 degrees outside, which can pose a serious health risk to dogs. At this outside temperature, a locked car can quickly get to more than 100 degrees inside.

Pangilinan went outside and local police were called. It was later discovered that a door to the vehicle was unlocked. Pangilinan and other E.D. staff got the dog out safely and put her on a leash. The dog’s owner, who had been admitted for cardiac issues, came outside and was grateful the team had pulled his dog – Mila, an Alaskan Husky – from the hot vehicle. He said he had arranged for someone to come get her, but they didn’t show up.

Worried about leaving Mila alone, knowing he would be in the hospital and not able to care for her, the patient tried calling boarding programs and shelters for assistance, with no luck. Pangilinan offered to care for Mila while the patient recovered in the hospital. The patient was extremely thankful, saying Mila meant so much to him. 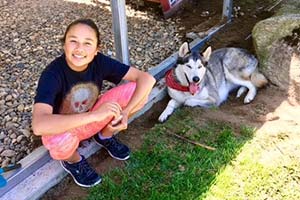 Mila was taken to Pangilinan’s home where his wife and kids fed her, bathed her and kept her safe until she could be reunited with her owner. Pangilinan visited the patient the following morning to let him know Mila was doing well. Later that evening, the patient was reunited with his beloved pup.

“He was very appreciative and grateful,” Pangilinan said. “He said he was able to recover faster and better, knowing she was being taken care of. He was so happy to see Mila.”

The patient offered to pay Pangilinan and his kids for their generous act, but they respectfully declined and told him to pay it forward.

“This was a great teaching moment for my kids and a great opportunity to help someone that was truly in need,” Pangilinan expressed.